At Russett Rehabilitation, we’re a close-knit team of highly qualified professionals. Our shared passion and mission is to help all our patients to recover and rehabilitate in less time, feel the best they can, to stay healthy, and to make positive changes to actively avoid injury. 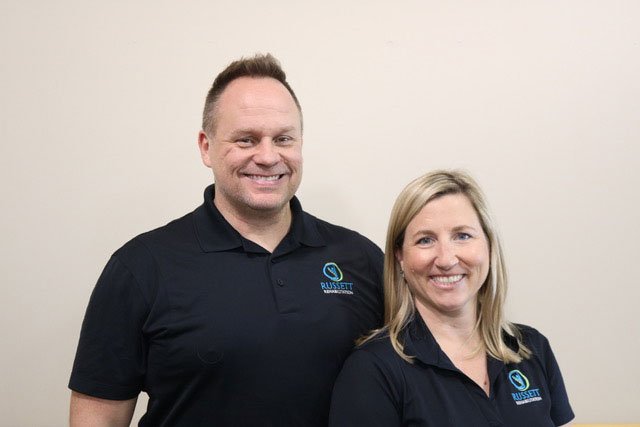 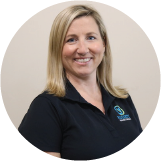 LeeAnn Russett received a BSc (Biology) in 1999 and BSc (Physical Therapy) in 2002, both from the University of Western Ontario. Since graduation she has pursued numerous continuing education courses in Orthopaedics, Vestibular Rehabilitation, Concussion Management, Dry Needling, Manual and Manipulative Therapy and Management of Persistent Pain.

She opened Russett Rehabilitation in Exeter in 2010 with her husband, Todd Russett. LeeAnn received her Clinical Masters in Manipulative Therapy (UWO) and became a Fellow of the Canadian Academy of Manipulative Physiotherapy (FCAMPT) in 2016. She received her certification for Integrated Dry Needling in 2017.

LeeAnn is committed to life long learning in her profession as a physiotherapist. She believes that her growth and education will never end. This is evident by the numerous post-graduate courses she has taken. Her goal is to treat the whole person and provide the most up to date, evidence-based treatments for her each of her patients.

When she is not at the clinic you can find LeeAnn hiking and running in the Pinery, or gardening in her flowerbeds. She is married and has two amazing children! 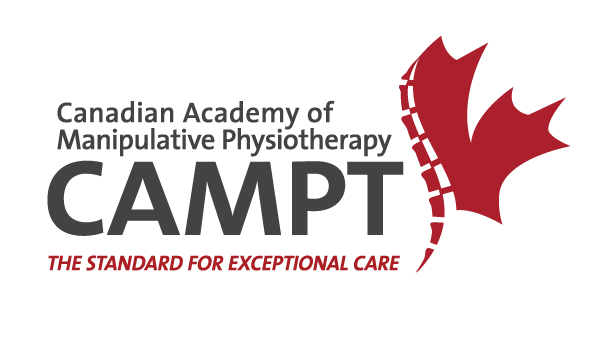 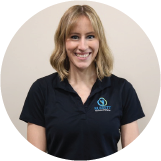 Shannen has always been fascinated by the human body and its ability to adapt following injury. She holds a Bachelor of Science degree in Kinesiology (2016) and Master of Science in Physical Therapy(2018), both completed at Queen’s University. While at Queen’s, Shannen competed at both Provincial and National levels as a member of the cross-country running team. She remains an avid runner, and continues to seek opportunities for personal and professional growth through involvement in sport. Shannen grew up in Huron County and is passionate about helping people in her community.

Shannen has been working at Russett Rehabilitation since 2018. Shannen is a registered physiotherapist who approaches her role in the healthcare system with care, pride and commitment to lifelong learning. She brings with her a creative repertoire of exercise prescription skills, a positive yet realistic attitude and a drive to problem solve.

Helping others to achieve optimal movement independence is a focus of all of her client encounters. “Celebrate the small victories!” is a motto Shannen has adopted following her own experience with a knee injury that sidelined her running career. Shannen has experience working with individuals across the lifespan, including seniors and paediatric populations. She continues to build on her skill base with training in manual therapy and vestibular and concussion rehabilitation. 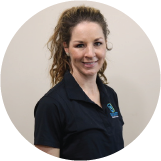 Cherie completed her Bachelor of Science in Physiotherapy at the University of Stellenbosch, South Africa, where she was born and raised. Cherie has furthered her Orthopaedic skills by obtaining her Certificate in Orthopaedic Manipulative Therapy (OMT) through the Orthopaedic Manipulative Therapist Group of the South African Society of Physiotherapy. She has completed AFCI Acupuncture levels 1and 2 and is certified through Acupuncture Canada (CAFCI). She has furthered her education by completing courses in Concussion Management, Vestibular Rehabilitation and Management of Persistent Pain.

Cherie has a passion for Pelvic Health Physiotherapy and has completed various courses focusing on the treatment of Urinary Incontinence, Prolapse, Pregnancy and Pelvic Pain. (For more details see our Russett Rehabilitation Pelvic Health services page.)

Cherie has been working at Russett Rehabilitation since 2020, and brings over 10 years of experience in the private practice setting. She strives to build a strong therapeutic relationship with her clients and believes that treating the whole person, not just the injury, is the key to successfully reaching collaborative goals.

In her spare time Cherie loves spending time outside with her husband, her two young children and their dog. She enjoys long hikes and bike rides in the Pinery as well as swimming in Lake Huron when the weather permits. When the Canadian winter gets too cold she loves to snuggle on the couch with a good book. 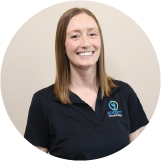 She has been with Russett Rehabilitation since the Fall of 2015.

Becky lives outside of Clinton with her husband, Coleson and their daughter, Carter.

Becky enjoys running and snowboarding and helping out with her husband’s construction business, Forbes Custom Building. Together they enjoy taking their dog Bear for walks, cooking for friends and family and spending time around their pool in the summer months. 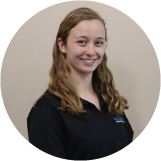 Alicia graduated in from Conestoga College from the Physiotherapy and Occupational Therapy Assistant program in 2019. She has been at Russett Rehabilitation since 2020. In her free time she enjoys playing soccer, going snowboarding and loves spending time with family. 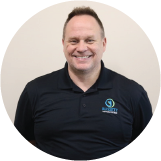 Dr. L Todd Russett graduated from the University of Waterloo in 1997 with an Honours Bachelor of Science. He received his Doctor of Chiropractic degree from New York Chiropractic College in 2001 and began practising chiropractic in London, Ontario shortly thereafter.

Dr. Russett began practicing in Exeter, Ontario in 2002. The experience was such a positive one, that he moved to the area. Together with his wife LeeAnn, Dr. Russett opened the Russett Rehabilitation clinic in 2010, fulfilling a lifelong dream of having their own business.

Over the years Todd has taken a number of post graduate courses to improve his ability to aid in his patient’s pain relief and recoveries from a variety of musculoskeletal conditions. These include soft tissue therapies such as Acupuncture, Myofascial Release, Trigenics, Active Release, DermaNeuroModulation, Exercise physiology and Pain Management sciences.

As a former university athlete, Todd has a continued interest in sports and the treatment of the various injuries they unfortunately can cause. This lifelong interest has also seen him follow the path of becoming a coach, and he has coached hockey, soccer, and baseball in both Exeter and Grand Bend.

Todd looks forward to many more years of serving the community and hopes to continue to provide the same high quality of service the clinic has become known for in the area. 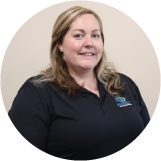 Cheri graduated in Massage Therapy from Medix College in 2007 and has been employed at Russett Rehabilitation since her graduation. She specializes in Swedish massage techniques.

Whether it’s for pure relaxation or more specific myofacial pain and trigger point therapy, Cheri enjoys making every treatment personal and enjoyable for her clients.

When she’s not at work, she’s enjoying farm life with her husband and two children, and can be found on the pitchers mound Thursday nights for ladies ball. 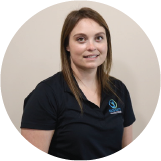 Originally from Varna, Kim graduated from Lambton College for Massage Therapy in 2013. Kim has been working at Russett Rehabilitation since 2013.

Professionally Kim would like to learn more about Pelvic Health and Pregnancy Massage. Kim has had the pleasure of working with a variety of people and various conditions, and is passionate about working with her peers and clients to reach their health goals.

Kim currently lives in Seaforth with her Bassett Hound Fred. When Kim is not working, she enjoys all outdoor activities like hiking or boating. 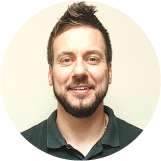 Demetre received a Kinesiology degree from The University of Western Ontario (UWO) in 2000.  He then went on a received a Certified Pedorthist diploma from UWO in 2002, became a Certified Pedorthist Technician in 2003. He has been practicing pedorthics since 2003 working for many medical clinics both big and small. Demetre has worked with Todd and LeeAnn Russett since 2003, and they continued their professional relationship when Russett Rehabilitation was started in 2010.

Recognising the need for high quality orthotics in 2008, he and a fellow physiotherapist opened an orthotic manufacturing facility named BioMech Orthotic Group. This has since expanded and Demetre is now manufacturing and repairing custom footwear, braces, leather and vinyl goods, repairs to medical seating surfaces, and recently custom coatings for various markets.

In 2008, he also began teaching Pedorthic students through the College of Pedorthics of Canada and UWO program, where he also mentored students in the clinic and at the laboratory facility. He was also invited to teach a lower limb unit on the foot, for a 4th year research course at UWO with a fellow Physiotherapist for a few years.

Demetre has worked across Canada in the Pedorthic field but has always returned home to London, ON where he currently resides with his family. Work keeps him busy and occupied but never enough to be away from the great outdoors as he is an avid Outdoorsman. 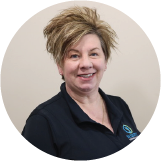 Jody graduated from Lambton College in 1992 with a major in Marketing. She has a love of animals, so she started her career at the Forest Veterinary Clinic in the role of clinic manager for 15 years.

After marrying her husband Jeff, moving to the family farm and having their first son, working closer to home was in order. So, in May 2002 she started as a medical receptionist in Exeter, where she started working with Todd and LeeAnn Russett shortly thereafter. She continued her working relationship with Todd and LeeAnn Russett, in the role of Office Manager, when Russett Rehabilitation was established in 2010.

As many of you know, she is the bright bubbly voice you’ll hear and big smile you’ll see when you first enter the doors at Russett Rehabilitation. Her love of animals is evident with her three dogs Macey, Sadie and Ruby and her cat Skye. Along with her husband Jeff and their three sons, Owen and twins, Brady and Cole, the farm has grow to include many more “pet” livestock than before! In her free time you’ll find her cross stitching and decorating her home with many second-hand finds. 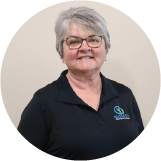 Nancy has been a part time receptionist at Russett Rehabilitation for over 4 years. She is married and the proud mother of three children, five grandchildren and her Schnauzer Sadie.

In her free time she enjoys reading, travelling and making preserves, but loves spending time catching up with her grandkids whenever possible.